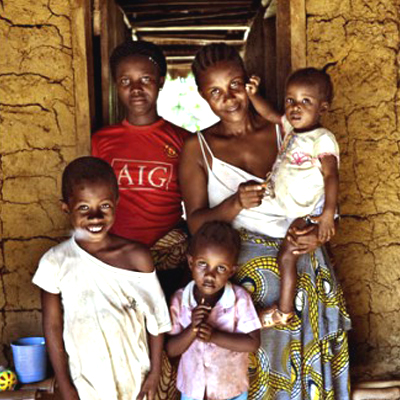 Charity appeal:
one pound for
Kingsville

In partnership with the charity Save the Children, The Sunday Times today launched a Christmas appeal

ARRIVE at the little clinic in Kingsville any morning and you will find a gaggle of women in brightly coloured traditional wraps waiting patiently – sometimes for hours – to have their babies weighed or vaccinated or to have their ailments diagnosed.

By 7am the corridor and waiting area are packed. It's no wonder Aletha Gbowee, the clinic's manager, admits she sometimes feels overwhelmed as she sees the crowds approaching. This single, tiny clinic in a village in rural Liberia, west Africa, serves a population of 20,000 people.

We do what we can but often that is very little, she says. If we see a child with malaria we can bring their temperature down, perhaps nurse them for a few hours. But very often you send them home knowing they will soon get malaria again.

The clinic's shelves hold a meagre supply of medicines and are low on even the basics, such as antimalarial drugs and antibiotics.

The Sunday Times Christmas Appeal, which launches today, aims to change that.

In partnership with the charity, Save the Children, we want to upgrade the clinic and kick-start its faltering vaccination programme, refurbish a tumbledown school, and install new water pumps for a population plagued by stomach upsets caused by contaminated water.

Aid is often so thinly spread it makes no perceptible difference: our aim is to start with Kingsville and really change things, then, if money allows, move on and do the same for neighbouring villages.

Simple things could make an enormous difference, says Susan Grant, Save the Children's local programme director. Liberia needs every bit of help the world can give.

A 14-year civil war that ended five years ago left Liberia's people hungry and exhausted and its infrastructure all but destroyed. Life expectancy is 45 years, and two-thirds of its people live on less than $1 a day.

The country has one of the highest child and maternal mortality rates in the world. One in nine children does not make it to its fifth birthday: one in 12 women dies in childbirth.

Getting children to their fifth birthday is the key goal – and the path to that is Save the Children's vaccination programme.

At the moment that is moving at a snail's pace, for the simplest of reasons – vaccines need to be kept cool to be effective, but there is no electricity in Kingsville and the clinic's ancient fridge runs on kerosene. With shortages of everything except poverty in Liberia, there's none to be had.

If we could install solar panels at the clinic we could generate enough electricity to run a fridge and provide some light at the moment there's none, says Grant.

We'd love to put in a new water supply and really get education going to provide opportunities for a new generation.

You can get a sense of life in Kingsville by visiting our web-site, created specially for the appeal. The site allows you to look around the village and some of the characters who are featured in the appeal's launch in today's Sunday Times Magazine, and who we will be featuring as the appeal progresses over the next four weeks.

Today, you can meet Kaytor, the clinic's practical and experienced midwife, who has delivered more than 300 babies in Kingsville and is training traditional midwives in outlying villages to spot potential problem pregnancies and raise the alarm.

Charles Dennis, the head-master, will take you on a tour of Kingsville's school. It is quite a sight: last year one of the walls fell down and the side of the school is supported by rickety bamboo posts. Its class-rooms have dirt floors and walls. There are more than 400 pupils, but no desks, books or pens.

Doyee, one of Dennis's pupils, will show you his home. You can follow Agnes Chea as she collects water from the creek. Her two-year-old niece died after drinking contaminated water last summer.

You can listen to Junior, whose wife died in childbirth last year. And there is a slide-show of Prince, a baby born in the village eight weeks ago a baby we desperately want to help survive.

Davina McCall, the televi-sion presenter, will be introducing a new aspect of life in Kingsville each week. A recent trip to the village was one of the most intense, emotional experiences of her life.

I met women who'd lost their babies . . . I'm a mother and it doesn't matter how old your baby is, it's still your baby, she says. Some people may think that you're not as attached if you lose a baby that's a few days old, but that's rubbish. From the moment it's conceived you're attached and if you lose a baby, whether through a miscarriage, or a stillbirth, or when it's a month old, it's the most gut-wrenching, painful experience that anyone can go through.

It's amazing that these women go on to get pregnant again and again and you can only imagine the amount of heartache they must suffer.

On arriving in Kingsville, she was at first confused: I've seen extreme poverty in cities and I looked around and thought life here is okay, it's clean, it's out of the city, it's not too polluted, what's the problem?

Then a woman with malaria collapsed in front of her. She'd heard Save the Children were there doing some filming and she'd walked with her two children to try to talk to us. I thought, She's dying, someone help her.

She was taken to the clinic but I don't know what happened. It was touch and go whether she would make it. How can that happen when £5 buys a life-saving mosquito net that a whole family can sleep under? That's the great thing about giving to developing countries, a little bit of money goes such a long way.

The Sunday Times appeal site is at tinyurl.com/stappeal